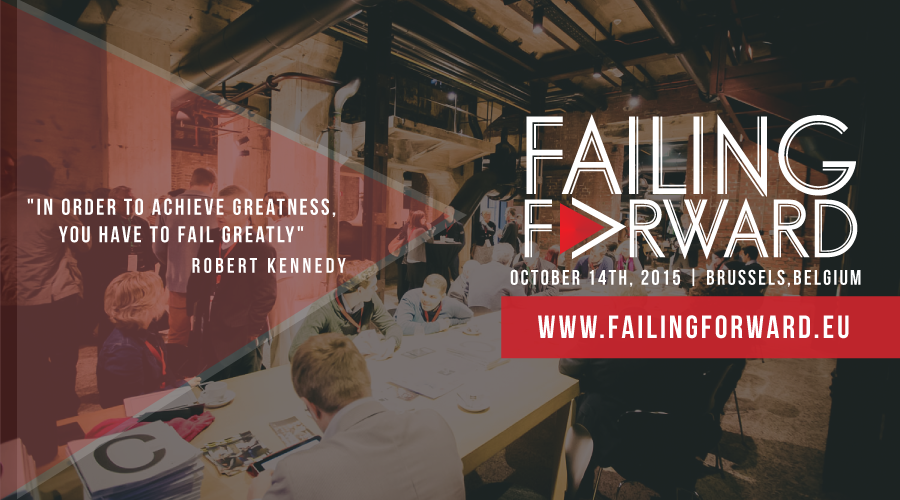 Today I had the pleasure of learning from great entrepreneurs and experts about failure. I was one of the keynote speakers at Failing Forward, a conference in Brussels, organized by Startups.be. Everyone talked about the importance of a real need for your product, and a real problem to solve, but there was more.

He turned down offers from potential buyers because he felt that he could get more. Until Facebook really created traction, and he was too late to change. He had to fire a lot of employees. However, with the best people still in his team he pivoted to Twoo.com, and became very big in online dating. Now he learned his lesson; so he sold on time to IAC, the company that owns Tinder and Vimeo.

Former Olympic athlete Cedric van Branteghem compared his sports life with his entrepreneurial life. One of his lessons I valued especially, was about fear. He said that real champions know that fear is always there, but they don’t let fear overtake them. When he walked into the Olympic stadium he felt like his feet were made of lead. But at the start he felt 120% ready.

I also believe that you shouldn’t ignore fear. Fear is a sign that there is risk, and you should be extremely sharp and careful at those moments. Without fear you loose an important signaling of danger. You can use the energy that fear creates to perform on the top of your game.

“I am too passionate to live without risks” said a woman who quit her job at Microsoft. She felt that her colleagues were very nice, but didn’t take risks. And therefore nothing really exiting happened. Which is something we see more at big corporations, told Paul Carroll, seasoned journalist from the Wall Street Journal.

Big corporates are very good in executing: they have the network, the organization, the money and the knowledge. However, innovation in different. It makes sense right: failure comes with risk, and risk comes with innovation. So if you want innovation: be prepared for failure!

To conclude, I think it is great that there is growing acknowledgement of failure-lessons in Europe. We all say that in de US the culture on failure is better, but I see great things happing at this side of the Atlantic Ocean. However, we are not there yet, so please keep sharing and celebrating your failures!